A nice getaway for an elegant dinner, bring a date here or splurge on yourself. The French are most well-known for their desserts and pastries, so make sure to stick around for those! 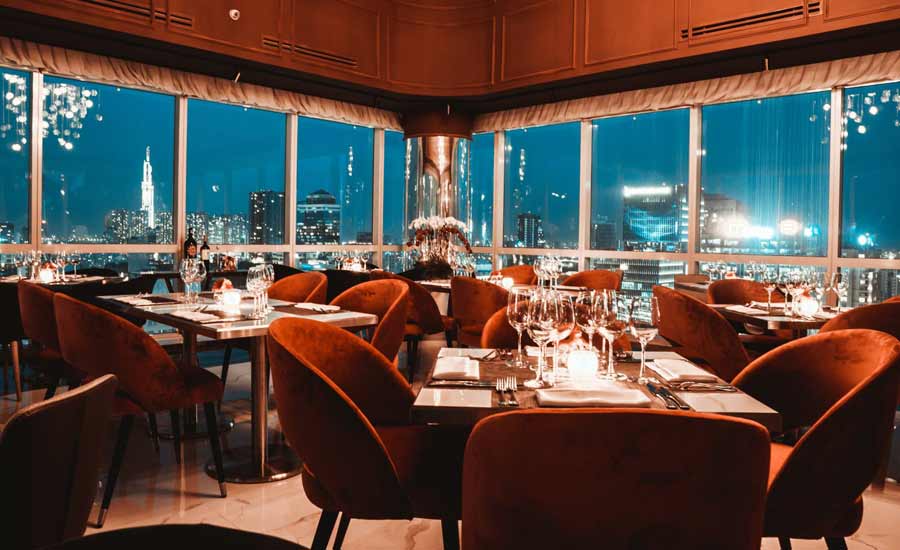 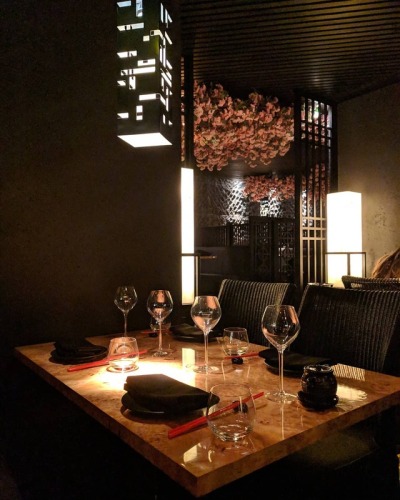 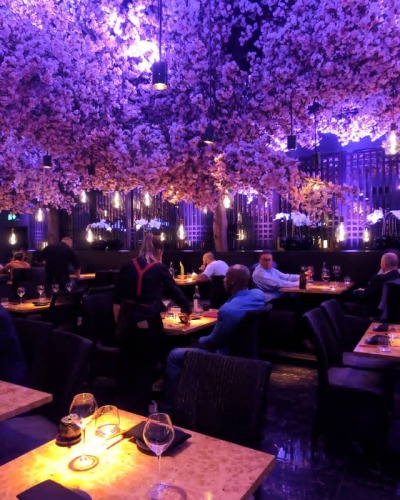 @jeon sana the only think i can't control myself from..
pauses for that dramatic effect, leaning in to bring their connected hands up so he could press a sweet kiss right to her knuckle.
is you.
nuzzles his cheek against the back of her palm with a content sigh.
i can't imagine a mere second without you, sana ya.

@jeon wonwoo we’ll see if you can.
her head tilts to the side as her gaze softens, a familiar fuzzy feeling wafting over her as she mirrors his expression.
i love you.
gives his hand a gentle squeeze as she eyes her wedding band with a smile.
being with you is surreal.

@jeon sana i'll control myself then.
sticks his tongue out at her teasingly, taking a glance at their connected hands with a soft smile curling upon his brims.
so are you.
utters without a thought, thumb caressing the wedding band that was wrapped around her finger.
my love.

@jeon wonwoo alrighty, but if you end up drunk like that one episode when you guys went camping... i’m taking videos.
eyes twinkle mischievously as she sips on the wine, humming in agreement, savoring the flavor.
i always enjoyed admiring skylines at night. it’s serene.
she plays with the glass in her hand, eyes drawn back to his side profile as she couldn’t help but admire him instead.

@jeon sana i'll be fineeee.
playfully rolls his eyes before lightly tapping their glasses together, taking a sip of the wine.
mmm.. tastes expensive.
with a chuckle, he sets the glass down, taking a glance out the window that overlooked the city skylines.
pretty, isn't it?

@jeon wonwoo you’ll get drunk if you drink on an empty stomach-
warns, her hand reaching out to take her glass, giving it a gentle swirl with a small laugh.
we’ll get your usual beer next time?
eyes sparkle as she raises her glass with a nod, gently clinking it against his.
cheers! to us heh.

@jeon sana didn't feel like it.
gives his shoulders a light shrug before he's chuckling quietly, taking hold of the wine glass to take a small inhale of it.
not my usual beer, but it'll do.
shoots her a playful grin before holding it out towards her.
cheers?

@jeon wonwoo hours? why didn’t you snack on anything before?
frowns at his words, eyebrows furrowing together as she gives his hand a gentle squeeze.
mm kinda heh. but now i’m with you ♡ you make things better. did you sleepy well?
eyes curve upwards, lips curling into a bright smile as she thanks the waitress.

@jeon sana mmm hours ago i think?
takes the time to simply just stare at her, fondness twinkling in his eyes as he runs the pads of his thumbs along her knuckles.
did you have a nice day today, love?
as he says that, the waiter comes to serve them their wine, pouring it into the glasses she placed onto the table, wonwoo thanking her with a small smile.

@jeon wonwoo do i?
she retorts cheekily, flashing a polite smile to the waiter before handing him the menu, taking a small sip of water as she glances over to wonwoo.
hungry baby? when did you last eat?
concern etched into her features as she holds both of his hands tightly.

@jeon sana do you, baby? do you reallyyyy?
muses with playfully squinted eyes before he's calling for the waiter to order their food and wine, the waiter taking back the menus and wonwoo shoots him a polite smile.
mmm hungry.
reaches for her other hand, fingers wiggling with a silent request.

@jeon wonwoo mmm i wonder.
leans in close to glance at his menu, nodding as her lips curl into a smile.
mm that sounds good heh. let’s get that!
her index finger traces the length of his, drawing little circles as she eyes the appetizers with a hum.
cheese! why didn’t i see that one?

@jeon sana i wonder when that'll be.
hums out in thought as he looks through the drinks menu this time, picking out one of the finer wines.
let's get this one?
he points out with a smile before flipping back towards the appetizers page on the menu.
and maybe... a cheese platter?

@jeon wonwoo yeah, littol ones.
warmth spreads in her chest as she nibbles on her lower lip as she plays with his fingers.
pizza! let’s get classic pepperoni?
glances up from her menu to admire him, biting back a small smile as her eyes trace his features.
what wine would you like, nonu?

@jeon sana the littol ones hmmm?
holds onto her hand, fingers intertwining together as he gives hers a little squeeze.
hmmm what about pizza? and then one appetizer?
looks through the choices of pizza, debating between them all as his thumb idly caresses over her knuckles.
wine sounds goood heh.

@jeon wonwoo especially before we get busy with littol ones
her eyes flicker up to flash him a sheepish smile, cheeks warming at the thought of their future.
mmm that’s a good idea! maybe something cheesy? or something light?
rolls her eyes playfully before she slips her hand in his, fiddling with his fingers as she eyes the menu.
maybe some wine too?

@jeon sana we should mm?
his eyes flicker through the menu, lips pursed as he hums in thought looking at all the choices.
do you wanna share a few things again, love?
he slides his hand across the table, fingers wiggling as a slight motion for her to hold onto it.
what do you feel like having?

@jeon wonwoo fancy schmancy!
sana gives him a curt nod, thanking the usher before she tucks her dress, settling down onto her chair as she flashes wonwoo a bright smile, unable to contain her excitement as she grabs the menu.
we should do this more.
she couldn’t help a small laugh as she notices his gaze on her, cheeks flushing red as she tries to focus on the menu.

@jeon sana the usher leads them both to their seat by the window and wonwoo gives him a smile as he pulls back a chair for sana for her to sit. seconds after, he sits right across from her as the usher puts their menus on the table for the both of them.
another fancy night for us hm?
muses with a small grin, looking through the menu but once in a while stealing glances at her.

@jeon wonwoo she couldn’t help but admire him, watching his little antics and habits that appear when he interacts with others, a bright smile curling onto her lips. she leans in, huffing as she places her other hand in his, squeezing it tightly.
meany. i don’t get That red. hmp. you’ll start crying won’t you?

@minatozaki sana he couldn't help but chuckle at her uttered words, raising a hand up to call the water to give him their order. once the waiter has taken the menus, his other hand slides out across the table as well, wanting to hold both of hers.
are you gonna be all flushed hmm?

@jeon wonwoo her eyes twinkle at the sound of wine, tilting her head to the side, placing her menu down to admire him, letting out a soft disney sigh at their outing.
i guess we're drinking tonight hehe

@minatozaki sana that sounds wonderful, baby.
gently holds her hand, intertwining their fingers together to give it a small squeeze. he proceeds to scan through the drinks menu with a thoughtful hum.
do you want wine? or anything else?

@jeon wonwoo that's a good idea!
eyes curve into crescents as she notices his hand, fingers reaching out to rest against his, wriggling her fingers lightly against his.
mm maybe a small appetizer platter? the cheese one?

@minatozaki sana should we share then?
unable to help himself, he slides his hand across the table to reach for her, fingers wiggling as a silent request for her hand, eyes still scanning the menu.
maybe pasta and some sort platter?

@jeon wonwoo mm maybe something light?
tilts her head to the side as she glances at him curiously before averting her eyes to the menu in front of her, letting out a small exhale as she takes notice of the price, glancing up to eye him curiously
what are you getting?

@minatozaki sana tucks her chair carefully before sitting across from her, taking another glance out the window as the usher places our menus on the table. he utters a thanks to the worker before squinting at the menu, looking through the food choices.
what do you feel like having, love?

@jeon wonwoo she holds his hand tightly as date jitters overwhelm her body, she glances up at him, watching as he interacts with the usher before quietly following behind him.
it's really really fancy..
mumbles softly, tucking her dress behind her before she settles into her chair, mouthing a small thank you

@minatozaki sana the elevator door dings open, he leads her in with their hands clasped together. the usher welcomes them and he utters the name of their reservation to the guy who leads them to their table just by the window, overlooking the view of the city skylines.
how fancy, huh?
with a small chuckle, he pulls the chair out for her and motions for her to take a seat.
<< Previous Room Next Room >>

can i have yuqi back? D:
may i get my nancY you back as my 2nd?
Can I have junghyeon back :(
may i have mizuki back?
hi, sorry please let me back in — ooc life been pretty ty rip.
— mark
Lee chaerin
Soloist
PW : no ulizing kids like a
Nevermind found it
One I would like to say as a member of the black community, your voice BLM is warming my heart, SECOND how do I apply I feel I may have over looked it.
Song Mingi pspspsp
c c can i have jaehyun back please?
Log in to view all comments and replies