a new tale: a new beginning: a new world 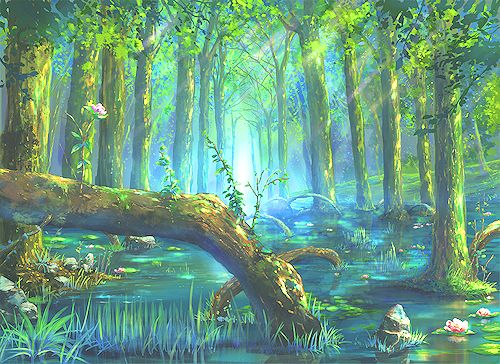 @➴ Chris Bang ☘5 Hansol hummed slightly as he listened to the other before nodding his head slightly. "Right now it's more cons than pros since I can't control it." He said with a smile glad the other wasn't completely pushing him away. Hansol hated being alone, and rather follow the other around at least until they were out of the swamp, the different smells of the swamp clouded Hansol's senses and he couldn't exactly get out, and not being able to control it he could shift either. His sharp hearing though did pick up on the other's stomach rumbling but he didn't say anything.
"It is pretty awkward, but I normally use what ever I catch on fire to my benefit." Hansol said nodding his head.

@➴ Chris Bang Hansol could see that the other was being cautious of him and to be quite frank, he couldn’t blame the stranger. Hansol was after all a stranger, and he did technically come out of nowhere. Which Hansol made mental note has to really stop startling people and coming out of nowhere. He played with his hanbok that he was wearing remembering he had to be careful with this thing on.

“Oh, I see. Okay then…” Hansol’s shoulder’s dropped when the other said he didn’t need his help. Hansol wanted to be of some use to the other. He was bored and was hoping to make a new friend out of the other. He be came a little sad at the fact that he may not get to befriend the other.

“Oh me? I am a shifter, a dragon shifter actually. Though right now I can’t really control much of it, one thing I can do is breathe fire as you see. Which is handy when I am outside and need to make food. But when I talk sometimes it escapes and yeah.” Hansol said rubbing his neck embarrassingly. He couldn’t wait to control his new found powers. He smiled warmly at the other in hopes the other would want to his help now that he was actually talking to him.

@➴ Chris Bang Hansol took the appearance in as he finally caught up to the male. He quickly went to his sword before realizing the other wasn’t going to cut him with the ax. He panted slightly holding his stomach before flashing the other a smile. He rubbed his neck with an eye smile before introducing himself.
“I mean no harm. My name is Hansol, did you need help carrying that?” Hansol asked tilting his head to the side as he put his hands behind his back. Hansol looked closely at the male he definitely wasn’t a computer like guy but he could guess that with the way he had talked as well. He smiled warmly at the male whether it was to help the male the carry it, or even lead the way out since it didn’t look like the male could read a map with carrying that big reptile on his shoulders which looked ten times heavier.

“Or I can read a map to help you get out if you rather that too. I don’t mind, or clear the way.” Hansol nodding his head with a smile. Hansol was way too friendly to strangers which were his downfall but Hansol never saw it as a bad thing he was always willing to help and make friends since he was a firm believer everyone needs friends. He rocked back and forth on the balls of his feet before almost falling off the log.

“That seriously needs to stop happening,” Hansol said puffing his cheeks out a bit. It was getting tiring having to make sure not to blow fire out his mouth when talking. Between always getting into some form of trouble and being clumsy he was surprised that he managed to survive this long in a game. After gaining his balance again he grabbed his map to look at it.

@➴ Chris Bang Hansol was walking around the swamp he was once again exploring even though he always managed to get into trouble or get lost since he had a bad habit of never bringing his map. He was humming to himself as he swapped the bugs away from him walking on a log, he looked around his surroundings again before keeping straight. His foot had almost slipped off of the log but he managed to catch himself so he wouldn’t fall deep in. The was the last thing he needed was falling into the water, he didn’t know what kind of animals lived in the swamp area and he didn’t really want to find out either. His mind begin to drift, he was hungry and he needed some food. Hansol ended up making up a song deciding to find a nice place to eat his pumpkin seeds and cook some corn.

Hansol continued to walk on a log before hearing something rustle behind him. He froze for a brief second forgetting he had a fire sword and sprinted. This was starting to become a habit for Hansol and he wasn’t liking it. But he suddenly froze realizing he wasn’t being followed. He turned his head before carefully walking back towards the rustling he had heard earlier. If it was some creature, it would have heard him and started chasing him. So he wondered if it was someone else in the swamplands with him. He ducks and dodges the many branches and whatnot before seeing someone up ahead. He stayed behind to make sure it was someone that could be like him. He hummed coming to the conclusion it was and he begins to jog slightly.

“Hey y~mmph” He covered his mouth as flames once again escaped his mouth. He mentally sighed before focusing way too hard to talk without catching the swamp trees on fire. Once he was more comfortable in talking he tried again.
“Hey you wait up~” Hansol nodded in satisfaction as the flames this time didn’t escape his mouth.
<< Previous Room Next Room >>

Question. Would it be alright for my wife and I to both join? We love to play together, but we would more than likely end up /mostly/ playing together. Though we'd both try to play with others.
Please let me know. Love you guys <3
im leaving as hyungwon
Hansol took his leave I don’t want to hold a character I won’t use
I may come back in The future just not right now
hello can I hiatus from the 31-7th? I'll be away without internet
Please add and reserve Yoon Sunha
please add and reserve jim jongin ^^
Chris has left. Thank you for having me.
Please add and reserve Jungkook (◍•ᴗ•◍)
➴ Wang Yibo
69 posts | 69 pts
I'm tempted but there's so many options that I can develop on depending on who I choose-
Log in to view all comments and replies

Seyver Estate: Let your desires take over
"Dear Sir/Madam, you are invited to