where the finest cuisine is served – perfect for dates. 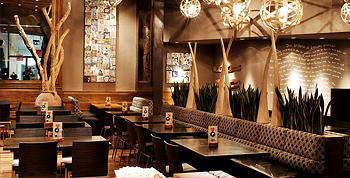 @β☄yoon jeonghan✧ Woohyun shrugged feeling that he could do that especially as he was particularly shy around strangers but with this boy he felt confident as he was sure the other was broken and needed help. It was a bit awkward between them - they didn't really know each other and yet he was offering friendship. "Well I could do that... Why not let's spend some time together. Can only be good for the both of us." Nevertheless he didn't really know what they could do plus none of them was really the talkactive type. "Why don't you tell me about your hobbies? Maybe there's some sport you like to do?"

@α❄nam woohyun✧ Jeonghan didn't want to look for love anymore and he wasn't going to beg for someone's love either, at least Woohyun could try feeling nice around him, because the beta had no intention of jumping on him or doing anything stupid at all. Both of them could be just friends and he wasn't going to force anything on him at all. "Be my friend? Really?" He tilted his head. Yes, he didn't take things well when his mate left him, but who would possibly be able to? Especially when they had actually spend almost no time together.

@β☄yoon jeonghan✧ Woohyun nodded understanding hoping Jeonghan would be fine again. "Maybe I can be your friend." The male wasn't exactly the type of person with too many friends because he usually was too awkward around strangers. In that specific case though he felt that the beta felt worse than him so he should try and comfort the boy. He didn't think he could be a lover like his former mate had been. "I could help you too." Seeing Jeonghan's piercings let him assume the beta wasn't taking the whole situation well. He really wanted to help and probably he could make the boy happy again.

"Sad? Don't worry..I'll be fine. Maybe someday I'll find someone that won't leave me. After all almost two months passed I should be forgotten. You just look so much like him..that's all." Jeonghan shook his head. Even in this state he won't worry the alpha, he didn't want someone to be sorry for him, he didn't search for this. The beta just wanted friends and maybe to finally cure the wound in his heart, but maybe he just realized this wound will never heal and he just has to find a way to move on. After all even if the alpha looked like him, this didn't mean he'll do anything to him or jump on him.

@β☄yoon jeonghan✧ Woohyun nodded along when Jeonghan ordered the food for the both of them. Only when the beta explained that he and his former mate didn't even have the time to go out neither before nor after their mating made him feel sorry for the male. Nobody deserved to be abandoned like that, especially if they sincerely loved their partner like it was the case for Jeonghan. The normally very awkward alpha leaned forward reaching out for the poor boy. "Don't be sad. I... know i can't imagine my mate leaving me but you have to move on." The alpha bit his lip pondering if he could help the boy somehow. "You know if you look for friends and meet, have fun, you'll be fine after some time went by. I'm sure of that."

@nam woohyun The fact Jeonghan was a beta was nothing to him, this didn't make him any different, he was just who he was..a shy and normally quiet person. When the other decided what to order he called the waiter and ordered what both of them had chose for themselfs. "Here? No...I wish we did, but we weren't much together...before we were mates, we were only friends and right after becoming mates he left, so we never really had the chance to go to such places. We were only on a date once, but it was nothing much...Anyways, it's not something you're probably interested in. My love life is a disaster-" He said somehow as a joke, but it was also kind of relateable. Oh well if not something else at least this made Jeonghan talk more. He didn't seem to sad about it, probably because he knew his mate won't come back.

@β☄yoon jeonghan✧ Woohyun noticed the shy behavior of the boy in front of him. For a beta it was relatively unlikely to act like that but it was still possible - even he as an alpha was awkward in certain situations. Skimming over the menu he decided for a beef steak, medium served with baked potatoes and sour cream. "Did you come here with your mate?" The question wasn't meant to hurt, Woohyun was merely curious. "I'll take this one." He pointed at the dish he's chosen before asking which one Jeonghan would be eating. The male wanted to get to know the cute boy better but then again he didn't want to interview him like a moderator. Maybe he would unbend eventually.

@nam woohyun Jeonghan lowered his head, blushing shyly and nodded when the other said he'll pay. He didn't have much friends to go out like this. When they found a table and sat, Jeonghan bit his lower lip. "Choose whatever you like. Trust me, there is no wrong choice here. Everything here is really delicious. I hope you like it here. Before I often came here.. " The beta stated as he looked away. It was nice to have someone to talk with, but it was somehow painful how much Woohyun looked like his mate. They never came here before together.. since he and his mate had known each other for long, but had only one date and back then Woohyun was in heat... that's how they've mated and that's when everything shattered. There was not a single chance for Jeonghan to spend time like this and now seeing the alpha infront of him... it was so strange.

@β☄yoon jeonghan✧ Immediately Woohyun shook his head, not accepting the fact. As an alpha wolf he was supposed to do those things, like paying and caring for the weeker statuses. "No. Really I invited you so I'm paying.", he insisted. Following the directions he drove the both of them to a small but fancy looking restaurant and Woohyun could guess by only the look that it was a secret hotspot in the city. He parked in front of it and waited for Jeonghan to come out as well. Once they had found a table inside Woohyun wanted to know: "Are there special dishes you recommend?"

@nam woohyun "Nah. I'm sure you're a good singer. And yes, I think we should...I really wouldn't mind.Also don't worry about paying I'll pay whatever I order.." Jeonghan wasn't comfortable with letting Woohyun pay everything and as a wolf he loved meat, but after all it wasn't that cheap..He was sure that the other wouldn't agree, but the beta was the type to always care about others. He got inside the car and sat, giving instructions to where the other should drive. "The restaurant isn't who knows what, but the food is tasty. I'm sure you'll like it."

@Ω☪Meto Nope you don't. If you didn't remind me I might do something bad and hurt you..
Sure let's go now. I'm sure it's clean~
*smiles and Peck your cheek*

@choi minki I over think...
/I sigh but smile/
Thanks or taking me out on this date, it's been really fun.
You want to head back to my dorm now?
I promise it's clean!

@Ω☪Meto Yah you're making me blush love.
*smiles and hug you*
I'm lucky too love
You cares for me too. You think far enough to explained things that you won't want us to do. Thank you Meto love.

@choi minki But that's what makes you perfect,
Because you care enough to treat me so sweetly.
Not everyone would.
/smiles and kisses your cheek/
I'm really lucky

@Ω☪Meto *blush slightly at your compliment*
I'm not that perfect love. I just do what I can for you. Knowing you have bad experience of bullying. This is the least I can do for you.

@choi minki How could I not trust you?
You've done nothing but be absolutely wonderful
/I point out, blushing a little bit/
I was a little scared at first, but you're just.... Perfect

@Ω☪Meto *smiles and kiss you back*
Anything for you love.
Thank you for trusting me.

@choi minki /searching your expression before nodding/
Okay, I trust you.
/I whisper, pressing a soft kiss to your lips/
Thank you Minki, you're so sweet and understanding.

@Ω☪Meto Hmm don't worry love. I will try my best to stay in control. Or I will just stay away in the forest till you or me are feeling better during your heat or my rut. I won't and will never forces myself on you. I promise.
*gently tilt your head up and smiles gently at you*

@choi minki i...I don't know
I just wanted to say something because I didn't know if you would be mad because of it.
/I explain, ducking my head down/
I just know consent will be hard during those times....and it scares me.

@Ω☪Meto *smiles and eats*
*hums and swallow the food*
No Meto it's fine. I understand neither do I want our first time to be in that kind of situation.
So what do you suggest??

@choi minki mmm...okay!
/smiles a little more and feeds you another bite/
umm Minki... I have a question.
I know it's not something we should talk about on a first date but... I could go into heat anytime and... I d-dont want my first time to be when I'm in heat or you're in rut...
maybe I'm being selfish b-but... I'm sorry...
I'm just anxious about everything...

@choi minki /giggles and sticks my tongue out at you/
Here have a bite of mine, then we're even
/holds up a bite to feed you/

@choi minki /blushes darker and focuses on my food/
/I eat a few more bites before playfully stealing a bite of yours/
Hmm I like yours too!

@Ω☪Meto *caress your cheek*
Me too.
*smiles gently and eats*
Agreed it's really good

e u e;;
ah the nostalgia
Where can I find Moon Lust?
is this rp active?
Can I be the Winter Shadow PAck Omega?
Are you Open
empressoftomorrow 1 month ago Reply All
Are you open?
Are you open?
are you still open and accepting applications?
Meeemorieees
Log in to view all comments and replies