this room is for ic rp purposes.

@☾ lancelot legume Mirth tugged the corners of Ten’s lips to a broader grin seeing Lance’s startled reaction, holding a palm out for the latter to shake. “Forgive me for the rude intrusion. The name is Ten Gold.” Mischief lit his eyes as they formed into crescents, a frisky hum emitting from his throat as slim digits grazed his chin in a thoughtful manner. “How do I know, indeed?” A chortle, filled with much gaiety, slipped from upturned tiers before the impish male elaborated, “The child of Rumpelstiltskin is no less omniscient and aware of his surroundings, not unlike his observant father.”

With a dramatic wave of his hand, Ten bowed a perfect ninety degrees, back straight and angle precise. Pulling his torso back up, the male tilted his head to inspect the art piece once more, taking in Lance’s words. Hearing the explanation though brought a bout of laughter from his throat, highly amused by the other’s unfiltered anger towards the villain who destroyed his sire’s life.

“Your sentiment is understandable.” Ten nodded solemnly, the gloom brief before replaced with his signature smirk once again. “Do you know of the child to the beast? After all, the monster of such a heartfelt tale did land with the beauty. They’re bound to have an offspring.”

@☾ ten gold Admiring the piece Lance just finished, he pulled out his phone to quickly take snap of it and post it on his sns for his followers' satisfaction—with a caption 'another day, another trouble, it's good tho right?'. Unlike in real life, Lance was a lot more humble in social media, the young senior knew that that's how you could capture a great amount of audience, express yourself and be humble, let the artwork do the talking.

Finishing up and was about to tidy his materials, he heard someone come up to him, commending his project, "oh, hi" he uttered kind of caught off-guard, Lance wasn't really a fan of people creeping up behind him. "yeah.." the protege answered with a nod of his head "..how'd you know me?" he asked, eyes landing towards the man in front of him, with a thorough inspection of the other's features he couldn't help but to turn his head a bit to the side 'he doesn't look familiar though' he noted to himself although admitting that the other male indeed has great taste.

"you see how I made the beast larger and darker? it's my way of saying you for ruining my dad" Lance spoke with a deadpan tone, his anger was contained, it always has been. But sometimes little by little, it slips and escapes through the trouble he makes as a student of FTA.

@☾ lancelot legume “Tonight tonight, my plans I make; tomorrow tomorrow, the baby I take. The queen will never win the game, for Rumpelstiltskin is my name~”

The song fell from thin tiers like a soft mantra, whispers of prayer, played on loop, repeating over and again. Hooked by the smooth rhyme and fascinated by the piquant beat, Ten chirped the tune his father hummed. The melody of a foolish man, arrogance clouding intelligence, losing the price of his own deal due to his own stupidity.

With a skip in his steps, Ten arrived to the front gate, happy feet slowing into a leisure walk as umber eyes caught sight of the view before him. A young man was spray-painting, moves determined and elegant, posture carefree and corybantic, constituting wonder on a canvas in front of him. Ever the curious kind, like a cat, the impish male stride towards the male, observing his features and soon recognising him to be the son of Gaston, lips pulling up into a natural smirk.

“Good day,” greeted Ten as he stopped beside the boy, glancing down at the art piece the other was working on. Gaze followed the dark silhouette of a beast, landing on the figure of a lady with the background colours to contrast, moving up to a table stand with a covered rose within. With an appreciative hum, Ten mused, “Beauty and the Beast — a magnificent tale laid out attractively on the canvas. It’s a beautiful piece, I must say, both the story and your graffiti.”

Smiling at the man, he held out a hand. “You must be Lancelot? My name is Ten.” Returning his gaze to the fine art, he remarked, “Did this idea come to you naturally, or had there been some sort of dissatisfaction brewing within you to create a piece such as this?” Everyone knew of Gaston and his villainy in his attempt of breaking up Belle and the beast, which ended disastrously one might say. “Is there any particular reason or meaning behind your work?” 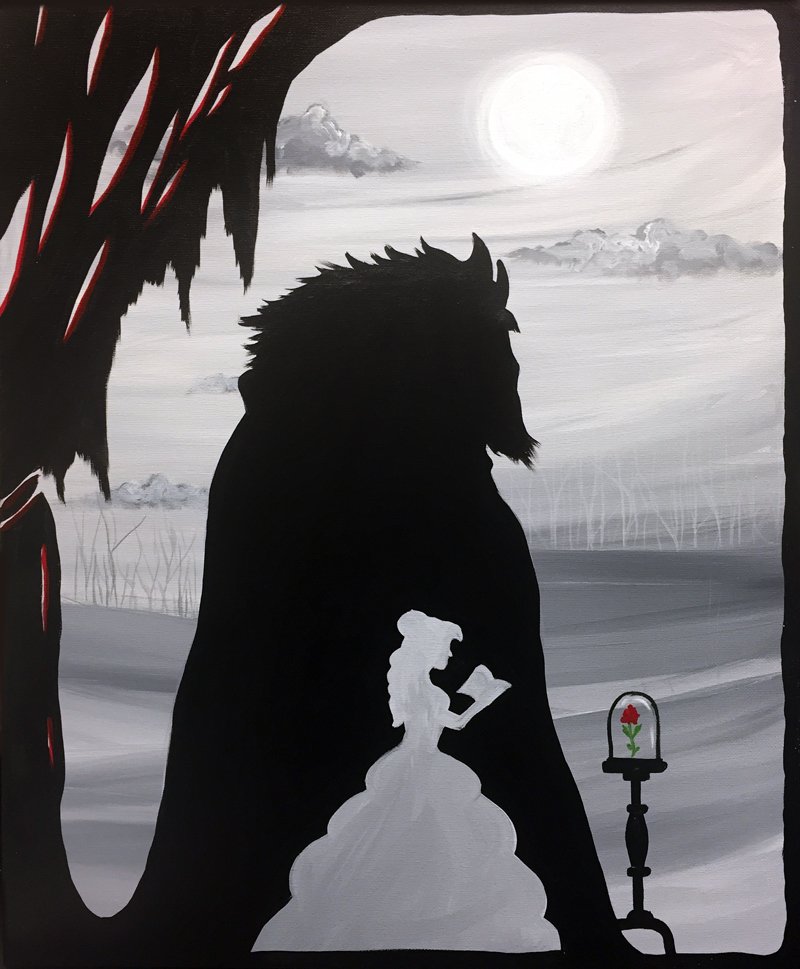 What artists of all kinds tend to have in common is that they’re naïve; they’re desperate– running after the beauty they see in the world, trying to capture the uncontainable in tangible, but sorely inadequate mediums. Sometimes they succeed.

The academy is a torrid enough affair for Lance. Nevertheless, between the lingering scent of paint thinner and all the charcoal stained newsprint, he finds that there’s always good in the bad, even if it takes a while to get there. Their school was in a great location on top of a very steep hill overlooking the city. Although the city looked completely different from his hometown, it still gave him a warm feeling that he could be apart of it. He sat in the quiet for a few minutes just letting his mind go blank. This way maybe getting a small break from his final painting will give him the motivation he needed to go back up to his dorm to finish it.

"should I do it?" Lance thought to himself, wondering if he should push through that graffiti project he had in mind for a week now. Deciding to finally do something besides standing there like an idiot, he reached out and grabbed his spray paint cans and brush to start a piece he'd always wanted to do.. in memory of the fairy tale his father was the villain of —spending hours in front of the academy's gate, Lance cracked his neck and rested in front of his artwork.

park chaeyoung
jeon jungkook
kim jiwoo
park jinyoung
park junghwa
yoon dowoon
sana please as daughter of rapunzel from tangled :3
(๑•̀ㅂ•́)و✧
ahn yujin as the daughter of princess kida as second? uwu
lalisa manoban as the daughter of the genie please and thank you!!
i've requested for a second notice me senpias ;^;
Are internationals allowed?
Song mingi as son of Hector Barbossa please~
kang younghyun as son of sir lancelot pls,,, make his name brian fhskxk
I would like to request Choi San as the son of tinkerbell please ^^
Log in to view all comments and replies