this room is for ic rp purposes.

@☼ ameena al mansouri "uh- yeah, a old man!" the senior exclaimed as if it was gonna help him completely convince Ameena who surely looks like she knows what's up.. Lance's brain had hit the panic button when the young female effortlessly shoved him out of the way, revealing the finished product he was too bashful to show to his inspiration. Lance has never felt this kind of agitation in his entire life, he was one to be very overly proud and cocky but this time, this time was different. Maybe it was the fact that Ena was different from everyone? she was cunning and has very strange humor to which Lance is very familiar with. He didn't want the latter to feel any discomfort just because he finds her as a perfect subject for his works. Watching the junior carefully inspect his work, Lance gazed elsewhere to avoid whatever look of dismay the latter was gonna have.

'damn, do i look fine or what?' .."h-ha?" was the only thing Lance was able to utter at that very moment, an apparent look of confusion had cross the protege's face. 'Did she really not mind at all? wasn't it a bit creepy?' he thought to himself quite bewildered as it was the response he wasn't expecting. Taking a step next to Ameena, he watched the younger one examine the entirety of the canvass, a faint smile stretched his lips seeing the other was indeed pleased of his piece. " I- well, don't get the wrong idea okay? I was looking for an easy subject to draw and you were the simplest of all plus..." Lance cleared his throat and pointed an index finger at where Ameena was seated earlier "... the light over there was good". The senior couldn't help but still be embarrassed behind that deadpan expression he has. "what? it's a project, it's supposed to stay here whether we like it or not" he added, kinda wanna suggest that he could just make another one but that's not how Lance works it's more of ".. but I like the idea of breaking in here when nobody's around.." yes, he's just not the type to do things the easy and legal way.

@☼ ameena al mansouri [ asdlfasdh I'm -- do it! okno sdkf this is some psychic thing ha!] 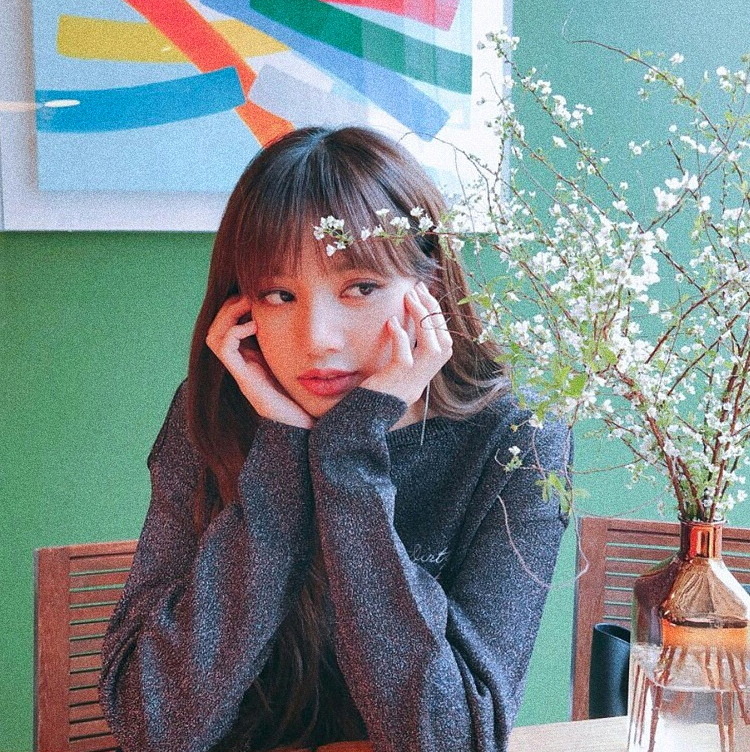 @☾ lancelot legume [] !!! its gorgeous *^* but also, its so weird because i was considering to change her dp into this fhsjshd
https://i.imgur.com/l3ybRx0.jpg 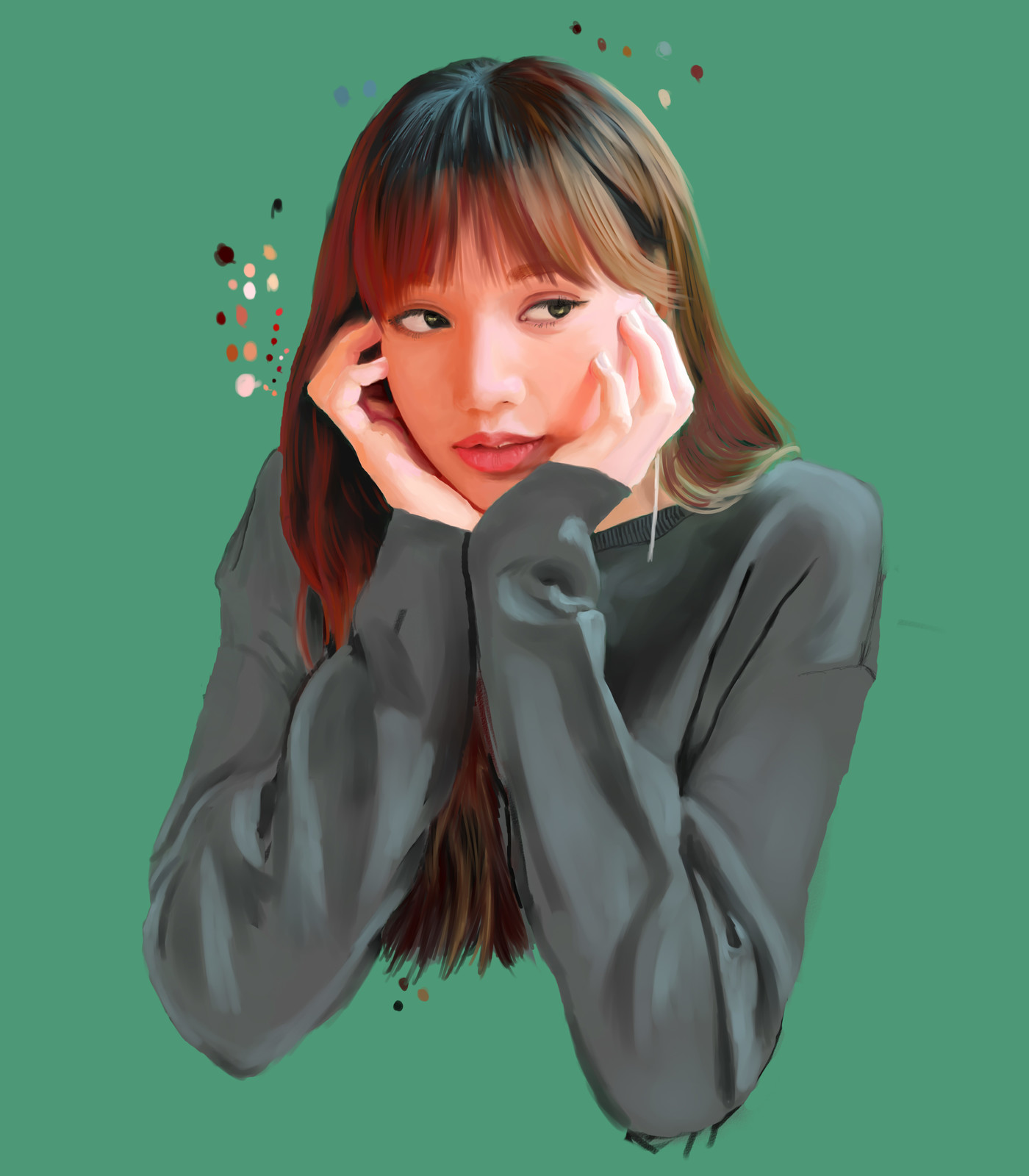 @☾ lancelot legume "....a man," meena reiterates, slowly. flicking her gaze between the impish grin gracing lance's features and the way adrian suddenly finds a profound interest in one corner of his painting, meena nods as if in complete understanding. though she doesn't make it a habit, meena could be a rather accomplished liar if she so wants to. and when one already master the art of deceit, sniffing out lies comes easy to them. especially one as painfully obvious as the one being carried out in front of her eyes. there's something fishy going on and meena is on it like a shark zeroing in on a blood trail. "it's okay. would be nothing i haven't seen anyway," she smoothly lies through her teeth as she quickly seizes the senior's arm within her grasp and exerts enough force to tug him out of the way - only to come face to face with....her own face?

"damn, do i look fine or what?" a low whistle sails out of her lips whilst her eyes take on an appreciative glint as they follow each careful of brush that make up the whole portrait. meena has heard a lot of things about lance - to be fair, who hasn't? the young female has never paid them any mind - she has learnt not to put too much trust in people's words of mouth and even if those /were/ true, who is she to judge him anyway? she has, however, seen and even admired some of his artworks around the campus ground. the latest would be a gorgeous rendition of the tale beauty and the beast -- she heard he got into trouble for that but she sincerely hopes that the artwork hasn't been taken off. that said, meena already knows that the senior has no shortage of artistic ability at his disposal, though when she is the one being subjected to said ability, the male's skill seem to climb up a whole level in her mind. "wow. is there any possible way i could smuggle this baby out of here? yknow, so i could hang it on my wall to feed my sense of vanity from time to timetime," her brown eyes flickers towards lance's profile, only half-joking in her query.

@☼ ameena al mansouri Struggling to find the right color for the hair and clothes of Ameena, Lance sighed heavily feeling a sense of defeat, he wanted to burst into a fit of anger as he would usually and normally do but today was different, he didn't like the idea of his muse to look at him like how everybody else had viewed him— the delinquent trouble make labeled by almost all of the prof, even the headmistress of villains, Maleficent herself.

'okay students times up! pass your works now, c'mon!' Miss Rapunzel announced and it almost made Lance choke as he quickly snatched a half-empty bottle of gray paint from his seatmate's pallet and just whipped desperately an image of Ameena's usual clothing, yes.. that's it Lance was sure he could pull this off; as everyone was busy showing off their mediocre paintings (lol) Lance yelled a "ffuuu-dge" out of exhaustion and adrenaline rush as he had finished his masterpiece.

'lancelo picasso blah blah blah', too busy to admire his own work, the protege wasn't aware that his inspiration for his creation was already in front of him, “Yeah,” Lance said softly, oblivious to who it was, he looked over the top of his canvas, eyes gradually widening at the sight of Ameena who was already inching closer to look at his artwork; and just like that the senior hastily stepped in front of his own canvass to cover it and hide it from the female's view. "uhmm haha! funny story, so- no, I can't let you see it - be..cause" he struggled to finish his argument as his eyes looked for a familiar face - Adrian's- for help on what to say when the other male made different obscene gestures - "..because I drew a man! yes !" mentally cursing himself for coming up with such a stupid excuse, Lance grinned mischievously hoping for Ameena to buy his reason.

@☾ lancelot legume done with casting a quick-dry enchantment over their paintings, the fairy godmother graces the class with a benevolent smile before exiting the room and meena breathes out a long-suffering sigh.

it's not that she dislikes painting, no. in fact, she rather enjoys the task in itself and the sense of calmness it brought on - quite odd, considering meena and calm should /never/ belong to the same sentence. but enjoyment doesn't necessarily equal to actually being good at it, the half-genie is forced to admit as she runs a critical eye over the purple and yellow blob depicted on her canvas. if one tilt their head a certain degree and squint, it could almost bear a teeny tiny resemblance to their painting class advisor. ....right? the comical grimace on her seatmate's face says otherwise and meena doesn't know whether to laugh or cry.

she doesn't have to ponder for long, though, as miss rapunzel has clapped her hands and urged them to submit their paintings to the front of the class. casting another doubtful glance at her poor excuse of a painting, meena reaches over to remove it from the easel and quickly stands up from her seatseat - only to brush shoulders with none other than lancelot legume himself, the resident artist of their academy aka the polar opposite of meena in terms of artistic ability.

"aye, isn't it the lancelo picasso himself?" she says by way of greeting, eyes crescenting into a good-humoured grin even as she leans forwards to take a peek at the male's, undoubtedly, newest masterpiece. "be a dear and let me take a look at your painting so i can cry over the enormous gap between our skills later, yeah?"

@☼ ameena al mansouri “I want you to paint a portrait of someone in this room,” Miss Rapunzel, the Painting class adviser had said to the circle of students watching her over their easels. “Pick anyone and paint. I want to see a finished painting by the end of the afternoon.”

Lance in a breath. He knew who he was going to paint, of course. It’d be easy to finish the painting in such a short time, seeing as he’d painted this subject more than once before. He glanced across at Ameena, who was frowning at her blank canvas with her eyes narrowed.
'Who ya painting, Lance?' Adrian asked.
“Uh, well. Ena is in a good light, over there,” he replied, gesturing carelessly at Ameena with his paintbrush. He leaned over to pick up his palette and started mixing the chestnut brown of Ameena’s hair.

The afternoon passed slowly but happily. Ameena didn’t seem to be looking up from her own canvas much, so Lance made full use of this reason to watch the female unashamedly; he paid careful attention to the way Ena's’ mouth curled up slightly on one side as she worked, and the shadows under her smooth jawline.
[post deleted by owner]
<< Previous Room Next Room >>

park chaeyoung
jeon jungkook
kim jiwoo
park jinyoung
park junghwa
yoon dowoon
sana please as daughter of rapunzel from tangled :3
(๑•̀ㅂ•́)و✧
ahn yujin as the daughter of princess kida as second? uwu
lalisa manoban as the daughter of the genie please and thank you!!
i've requested for a second notice me senpias ;^;
Are internationals allowed?
Song mingi as son of Hector Barbossa please~
kang younghyun as son of sir lancelot pls,,, make his name brian fhskxk
I would like to request Choi San as the son of tinkerbell please ^^
Log in to view all comments and replies